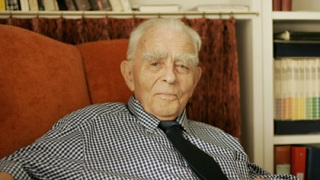 Founder of the Brain Research Institute of the University of Zurich and strong advocate for neurosciences, Prof. Konrad Akert has laid the groundwork for today’s neuroscience research in Zurich. At the age of almost 96 years, he passed away on 10 January 2015. We look back at an exceptionally fruitful career.

Konrad Akert has advanced neurosciences in Zurich by establishing a stimulating and highly visible research environment, the “Hifo”, by mentoring a generation of outstanding researchers, and by contributing pioneering research articles in multiple areas of neuroscience. He had the wisdom and courage to tread new paths and did it with unfailing dedication.

Konrad Akert studied medicine in Zurich and obtained his doctoral degree with the Nobel laureate Walter Rudolf Hess. Akert then moved to the US in 1951 to work at the Johns Hopkins University and, as a faculty member, at the University of Wisconsin. Soon after his return in 1961, Konrad Akert founded the Brain Research Institute of the UZH, a crucial step with which he laid the foundations of neuroscience research in Zurich, as we know it today.

Among his major accomplishments, Konrad Akert has obtained groundbreaking results in his research work on the structure and function of the frontal lobe, the cerebral control of the musculoskeletal system, and the structure and function of synapses. He has co-authored over 340 publications, among which several classics, such as “The visual grasp reflex” 1, “Comparative anatomy and thalamic projections of frontal cortex” 2 and “Specialized paranodal and interparanodal glial-axonal junction in the peripheral and central nervous system: A freeze-etching study” 3. Konrad Akert has also founded the journal “Brain Research” in 1964 and was Editor in Chief until 1974. At the time, “Brain Research” was the leading publication in neuroscience.

In 1984, at the age of 65, Konrad Akert was appointed president of the UZH and he was the first full-time president in the history of the university. He retired in 1988 but remained closely associated with the UZH and keenly interested in neuroscience research until his death. In 2007, the Swiss Society for Neuroscience recognized him for his exceptional scientific career and his efforts to promote the field of neuroscience in Switzerland with an honorary membership.