In February 2015, Christian Baumann was appointed associate professor of neurology with the particular focus on Parkinson’s disease and movement disorders. He is affiliated with the Department of Neurology of the University Hospital Zurich. His appointment is the first important milestone in the development of Parkinson’s disease research in Zurich. A second assistant professorship for fundamental research in this area is currently being planned. 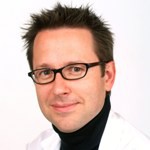 . It develops gradually, sometimes starting with a barely noticeable tremor in just one hand. But while a tremor may be the most well-known sign of Parkinson’s disease, the disorder also commonly causes a range of other symptoms.

The research in Christian Baumann’s group focuses on non-motor symptoms of Parkinson’s disease such as sleep-wake disorders and on other neuropsychiatric symptoms. In their largest study, the group investigates whether modulation of sleep will not only improve the daytime symptoms of patients, but will also have an effect on neurodegeneration. Within a randomized, double-blind and placebo-controlled study, Baumann examines whether chemical sleep induction in Parkinson’s patients can improve excessive daytime sleepiness as well as motor function. In parallel, using a transgenic murine model of progressive Parkinson’s disease, he explores whether modulation of sleep has an impact on disease progression, in terms of both behavior and neurodegeneration.

Using continuous dopaminergic stimulation against neurodegeneration
L-dopa, the precursor of biologically active dopamine, is used in the clinical treatment of Parkinson’s disease. Its half-life is short – approximately 1.5 -2 hours – making treatment difficult. In one of his projects, Baumann studies the effect of continuous stimulation of dopamine receptors on disease progression. Here he uses medication with a longer half-life than L-dopa to investigate whether this treatment has a beneficial effect on disease progression. In humans, an observational study over a one year period is carried out to test if continuous dopaminergic stimulation decelerates neurodegeneration, as assessed by functional nuclear brain imaging. Furthermore, the group investigates if continuous dopaminergic stimulation leads to a decreased accumulation of alpha-synuclein, a protein that aggregates in the Parkinson brain, in a transgenic murine model of Parkinson’s disease.

Further current and planned projects in Baumann’s group focus on other symptoms of Parkinson’s disease and include the behavioral assessment of apathy, depression and sleepiness in Parkinson’s mice, novel treatment options to improve impulse control disorders in Parkinson’s patients, novel treatment options for delayed gastric emptying and orthostatic dysregulation, and an experimental approach towards novel indications of deep brain stimulation.