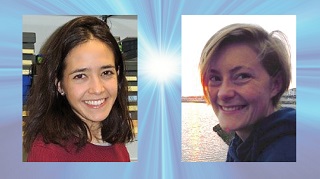 Two prizes were awarded this year – one to Sara Bernardez Noya and one to Lilian Weber for their excellent doctoral theses in sleep research and human perception, respectively. The prizes were announced at this year’s ZNZ Annual Symposium, which was conducted entirely online.

Sara Bernardez Noya conducted her work entitled “Synapses Never Sleep: Uncovering Daily Rhythms in Mouse Forebrain Synapses Using Integrative Omics” in the research group of Steven Brown at the Institute of Pharmacology and Toxicology and it was published in Science. It holds messages of considerable societal relevance – especially pertinent to our “24-hour” society, which in its constant quest for production and efficiency has ignored human evolutionary norms for sleep and daily rhythms. An increasing number of epidemiological studies confirms the pernicious consequences of sleep and circadian disruption to health. Sara’s own work provides the first comprehensive picture of exactly how these disruptions disturb the carefully timed orchestration of brain function. From metabolic syndrome to mood disorders to cognitive decline and neurodegeneration, the signatures of these problems can be read from Sara’s datasets in molecular detail, forging from this basic science resource a societal warning.

Lilian Weber carried out her research entitled “Perception as Hierarchical Bayesian Inference” in the group of Klaas Enno Stephan at the Translational Neuromodeling Unit. Her work was published in the Journal of Neuroscience, in NeuroImage and in Biological Psychiatry. Lilian’s research has been inspired by the currently most influential theory of human perception, the so-called “Bayesian brain hypothesis”. This theory states that the brain implements a statistical model of the world and uses hierarchical Bayesian inference to recognize the state of the world and thus the causes of its sensory inputs. While this framework is very influential and theoretically compelling, there has previously only been limited empirical evidence in support of central predictions by this theory. Lilian used both novel experimental paradigms and elegant computational approaches generating results consistent with the theory.