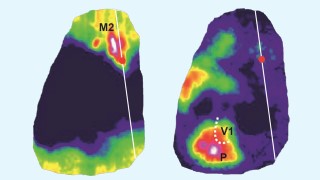 New research shows that different areas in the cortex are involved in short-term memory. Importantly, the location depends on behavioral strategy. Even though the different brain areas keep distinct relevant information in memory, they can still support the same action.

How sensory information is processed in the brain when distinct stimuli need to be discriminated in a task is a central question in neuroscience. Previous research has shown that sensory information is processed mainly in the posterior sensory parts of the mammalian cortex, and that frontal motor cortices are involved in appropriate action planning and preparation of movement execution. It is however less clear, which cortical areas process the intermediate step between sensation and action and where task-relevant information is maintained in short-term memory.

In their paper published in Neuron, Dr. Ariel Gilad, Prof. Fritjof Helmchen and colleagues from the Brain Research Institute tested whether different behavioral strategies used by mice could influence cortical activity patterns. They presented sandpapers with different graininess to the whiskers of mice, which were trained to lick for a water reward after touching one particular type of sandpaper. Mice could not retrieve the reward immediately, however, but had to wait for a few seconds after touching the sandpaper. In the waiting delay period they had to hold relevant information – which type of sandpaper was presented or whether to lick or not to lick – in short-term memory, until they heard an auditory tone that signaled they could now respond.

Strategy dependent brain activation
The mice used different strategies to touch the sandpaper: they either actively approached the sandpaper with body movements, or, in contrast, they passively waited for the sandpaper to touch their whiskers. Whereas some mice used only one strategy, others alternated between active or passive strategy. By using transgenic mice that express a calcium indicator in layer 2/3 of the cerebral cortex, neuronal activity could be measured with wide-field and single-cell calcium imaging. The researchers found that in trials where the animal actively approached the sandpaper, action-related information during the delay period was maintained in frontal neocortical areas (particularly in the secondary motor cortex), whereas for passive trials posterior areas were activated. In the latter case, the delay period activity was especially strong in a region just posterior and lateral to the visual cortex and rather reflected sandpaper-type.

“We have discovered that dependent on behavioral strategy, completely different areas are activated during the delay period when information has to be maintained in short-term memory, even if they result in similar action”, says Fritjof Helmchen. “This knowledge helps us better understand how information is processed in the brain.”