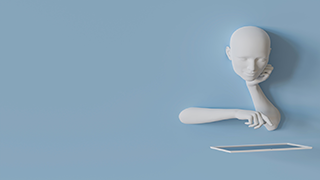 Mobile phones have become an integral part of our 24/7 society. From a health scientific perspective, they represent at the same time a potential negative influence but also a unique opportunity to gather big data. In a clever research approach, Reto Huber from the University Children’s Hospital Zurich and Arko Ghosh from Leiden University used touchscreen interaction as a marker for cognitive fluctuations.

Sleep and the 24-hour cycle impact our daily cognitive performance, which is apparent in every one of us but in particular in various patient populations. People suffering from chronic insufficient sleep or working in shifts and insomnia associated with a depressive disorder are only a few examples for this relationship.
In their study, the authors collected data on mobile phone use and physical activity in a healthy population over a prolonged period. An analysis of the so-called “tappigraphy” (i.e. smartphone touchscreen interactions) data allowed us to establish parameters that are unobtrusive and sensitive biomarkers of the diurnal changes in cognitive performance, e.g. tapping speed or the time to select an app icon or to unlock the screen.

The results reveal that tappigraphy yields stable diurnal changes in cognitive performance. Moreover, specific periods around bed and wake-up time show strong fluctuations of performance. Such fluctuations are difficult to collect in experimental settings. At the same time, they highlight the relevance of the analyses for shift and on-call workers. Errors during work that occur due to sleepiness or sleep inertia can be sad and costly. Biomarkers for cognitive fluctuations such as the ones derived from tappigraphy may hold important information and great potential for studies of the above-mentioned clinical populations.