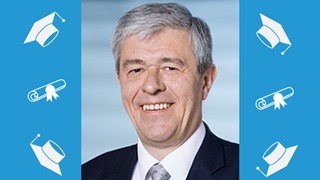 Prof. Karl Friston, University College London, has been awarded an honorary doctorate from the medical faculty of the University of Zurich in recognition for his pioneering work in developing mathematical methods for human brain imaging and theoretical and empirical contributions to research aimed at understanding human perception and decision-making.

Prof. Karl Friston received his degree during the Dies Academicus of the University of Zurich on April 30, 2016. His many research collaborations with groups of both the medical faculty and the faculty of business, economics and informatics of the University of Zurich, have led to a large number of scientific collaborations and high ranking publications. This has strengthened the academic position of the systemic and clinical neurosciences at the UZH.

His major contributions include the development of dynamic causal modelling (DCM), a method for the interpretation of functional neuroimaging data, the development of the Statistical Parametric Mapping (SPM) software, in which the theoretical concepts of DCM are implemented and his theory of the free energy principle for adaptive systems that tries to provide an overarching model of how action, perception and learning in the brain works.