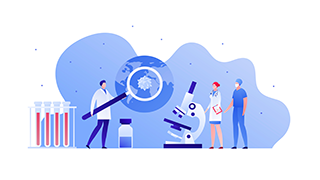 Currently 50 million people worldwide suffer from Alzheimer’s disease (AD) and other forms of dementia, with this number expected to increase. It has been more than a century since the disease was first described, however there is still no clear understanding of the disease pathophysiology, nor effective treatments are available. Our guest writer, Zhiva Skachokova, browsed through the literature on the development of Alzheimers disease. What happened to the once promising hypotheses that have not yet seen a clear breakthrough?

The amyloid-hypothesis, suggesting that buildup of the protein amyloid-ß is the main cause driving the disease, has been dominating the field since the early 90s. It was based on the discovery that mutations in the APP gene, as well as in the genes involved in amyloid production, were found in patients with familial AD. It is thought that amyloid-ß aggregation triggers a cascade or events leading to inflammation, tau tangle formation, neurodegeneration, and ultimately dementia.

However, the amyloid hypothesis has come under scrutiny lately. Critics of the hypothesis argue that amyloid plaques are quite often found in healthy elderly and that their load does not correlate with disease severity. In addition, no amyloid based therapy has made it to the clinics so far, and in fact, with a failure rate of 99%, the number of compounds for regulatory review is among the lowest in any therapeutic area. Aducanumab, an antibody clearing amyloid plaques developed by Biogen, showed initially a promising dose-dependent effect, however these results were not replicated at a later phase trial, leading to its discontinuation in March 2019. Surprisingly, the company announced just a few months later that post hoc analyses suggested sufficient efficacy to justify a new drug application. The US Food and Drug Administration (FDA) is currently reviewing it and if approved, Aducanumab will be the first immunotherapy against Alzheimer’s disease, and also the first clinical proof of the amyloid hypothesis.

While the focus on amyloid-β has dominated Alzheimer’s disease research for decades, other hypotheses exist that have received less attention (and funding). Tau is another protein forming typical aggregates in AD and has been linked to neurotoxicity. After a clinical trial in 2012 with Epothilone D, a microtubule stabilizer, was halted due to adverse effects, currently there is an ongoing phase III trial with a tau aggregation inhibitor.

Some researchers suspect that microbes are involved in the pathogenesis of AD. For instance, infection with herpes simplex virus increases a person’s risk of the disease, and variants of genes linked to the non-genetic form of Alzheimer’s disease, such as APOE, regulate immune function. Furthermore, amyloid-ß has been shown to be an antimicrobial peptide, forming a net that traps the infectious agents. This was supported by a study in Taiwan showing that people treated with antiviral drugs are ten times less likely to develop AD.

In summary, the causes of AD might be multiple, including inflammation, microbes, genetics, or perhaps a combination of those. While these remain to be identified, the amyloid hypothesis is approaching a crucial trial with the FDA decision on aducanumab pending in June. While the clinical data from Biogen were met with pessimism from the scientific community, there is a social media campaign advocated by patient organizations supporting the drug approval. While “More Time”, the name of the campaign, might also mean more time for the amyloid hypothesis, alternative hypothesis might finally deserve more attention, too.