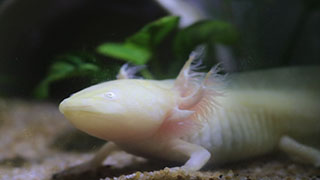 Axolotl salamanders are amphibians that have the astonishing capacity to regenerate its brain after a large section is being removed. However, it has been unclear how complete this regeneration is, whether all lost neurons are reemerging and whether these neurons are re-establishing their connections with other parts of the brain. In a study published in Science, an international team of researchers from Barbara Treutlein’s lab at the Department of Biosystems Science and Engineering, ETH Zurich, mapped out all cell types of the axolotl forebrain, and studied the formation of new neurons during regeneration.

Different cell types have different functions. They can specialize in certain tasks because they each express different genes. The research group around Barbara Treutlein used a method called single-cell RNA-sequencing that allows to measure all the active genes in individual cells. This information is helpful to understand the type and function of each cell and allows for building cell atlases of tissues. The authors applied this method to thousands of cells isolated from the axolotl forebrain in steady-state and during regeneration, which allowed them to describe all the cell types that compose the axolotl brain and to ask whether and how these cell types are reemerging after injury. Using injection of dye into neurons in one part of the brain, the researchers trace their connections to other brain regions in the uninjured tissue.
The types of neurons that were removed during injury all reappeared during regeneration. Even more, the connections these neurons had with neurons in other brain regions were also reestablished during regeneration. This indicates that regeneration is complete and that the regenerated area regains its original function. Apart from this, the authors found that neuron types in the axolotl forebrain show similarities to neuron types in the mammalian forebrain, indicating that this brain region is evolutionarily conserved. This result has significant implications for regenerative medicine. Knowing which genes and cell types are enabling axolotls to regenerate their brain after major injury may be the key to improve treatments in the future and to unlock regeneration potential in humans.