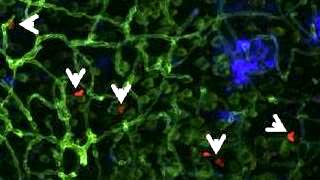 Dr. Maria Teresa Ferretti was awarded a three-year research grant from the Synapsis foundation to study the role of the immune system in Alzheimer’s disease. Together with co-applicants Dr. Luka Kulic and Prof. Britta Engelhardt she will investigate why the immune system in Alzheimer’s disease patients is unable to clear amyloid aggregates from the brain.

A mounting body of evidence indicates that brain immune cells fail to eliminate neurotoxic aggregates of amyloid beta peptide (Aβ) in Alzheimer’s disease (AD). The question why the immune system in AD patients is unable to phagocyte Aβ is crucial in the field. In her project ‘Impaired immune surveillance in Alzheimer’s disease: studies on pre-clinical transgenic models and patient-derived samples’, Ferretti and colleagues of the Institute for Regenerative Medicine and the Theodor-Kocher-Institute, Berne, propose that inefficient phagocytosis is part of larger failure of brain immune surveillance in AD.

Impaired antigen presentation inhibits microglial cells
This failure in amyloid clearance seems to be caused by active inhibition of the immune system by aggregated Aβ. Whether and how brain immune surveillance is altered in the progression of AD has never been studied in detail before. Preliminary results from Ferretti and colleagues suggest that antigen presentation is impaired, resulting in the accumulation of brain regulatory T cells that inhibit microglial cells.
To further elucidate the mechanisms of impaired immune surveillance in AD and identify novel biomarkers for disease progression, Ferretti will use pre-clinical animal models, post-mortem AD-patient material as well as well-established antigen-presentation in vitro assays.