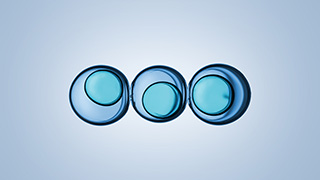 The human brain is one of the most complex objects we know. However, in the event of injury or disease, the brain has very limited intrinsic regenerative capacity. Stem cell-based therapy has tremendous potential for brain regeneration. Christian Tackenberg und Ruslan Rust from the Institute for Regenerative Medicine (IREM) at the University of Zurich have teamed up with colleagues from the Center for iPS-Cell Research and Application (CiRA) at Kyoto University to generate neural progenitor cells (NPCs) that can be safely transplanted into mouse models of brain diseases.

The researchers used human induced pluripotent stem cells (iPSCs) and differentiated those to NPCs. The NPCs were subsequently transplanted into immunosuppressed mice and both cell viability and localization were analyzed by in vivo imaging.
Already at this stage, they had the future human application in mind and developed a protocol that will facilitate potential clinical approval. An essential step was also to remove residual iPSCs from the NPC culture to prevent the growth of tumors. This so-called RNA switch technology was applied in close collaboration with the colleagues from the Kyoto University.

The generated NPCs were stable over several times where the cells have been subcultured, i.e. harvested and reseeded into multiple ‘daughter’ cell cultures. Thus, the NPCs could be massively expanded to generate a large batch of cells for transplantation. Thirty-five days post transplantation, most NPCs differentiated into mature neurons. Survival and neuronal differentiation could be further proven in a mouse model of ischemic stroke. Importantly, no remaining pluripotent cells were detected in vivo. Accordingly, the authors did not observe adverse events such as tumor formation. Despite recent advances in stem cell technologies, cell therapies to the injured brain have not yet been able to reach clinical application. Tackenberg and Rust now report a simple protocol for the generation of human NPCs that differentiate into neuronal cells after transplantation. Combined with the ability of in vivo cell tracking it represents a valuable tool to develop safe and effective cell therapies for various brain injuries.