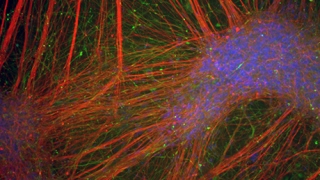 BACE1, the enzyme involved in amyloid formation, is an important therapeutic target for Alzheimer’s Disease. Blocking BACE1 has, however, led to severe side effects. Professor Lawrence Rajendran and colleagues have now shown a method to block BACE1 without affecting its vital functions.

Extracellular amyloid (Aβ) deposition is a central occurrence in Alzheimer’s disease. The protein fragment is generated by cleavage of the amyloid precursor protein by the β-secretase (BACE1) and γ-secretase. BACE1 is therefore an attractive therapeutic target for AD, but complete blocking of BACE1 has severe side effects as the enzyme is also involved in processing of many other, non-amyloid, proteins such as Neuregulin 1 (NRG1) and L1. In their study recently published in Cell Reports, an international research group headed by Lawrence Rajendran of the University of Zurich has found a way to specifically inhibit the disease-causing activity of BACE1, without affecting processing of other cellular proteins.

Cell compartment-specific blocking
For this study, the authors made use of differential processing of proteins in different cellular membranes. Whereas BACE1 is present on the membrane of several cellular compartments, the authors showed that APP processing by BACE1 occurs specifically in the early endosomal compartments and is dependent on selective uptake in vesicles formed from the plasma membrane (endocytosis). In contrast, processing of the non-amyloid proteins L1 and Neuregulin by BACE1 is endocytosis-independent and seems to occur in the trans-Golgi network as their interaction with the enzyme is driven by higher-affinity interactions. With the knowledge of this difference in processing, the authors went on to treat cultured cells and cultured human neurons (derived from induced pluripotent stem cells) with a sterol-linked BACE1 inhibitor that had previously been shown to specifically block BACE1 in endosomes. The result was that APP processing was inhibited, while non-amyloid proteins NRG1 and L1 were processed normally.
“The specific efficacy of our inhibitor opens up a promising way to treat Alzheimer’s effectively in future, without causing the patients any serious side effects,” says Rajendran. The researchers’ next goal is to optimize their drug candidate initially for animal experiments and ultimately for clinical studies on Alzheimer’s patients.