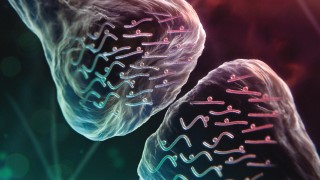 Do we sleep because we are tired or because we follow a circadian rhythm? Steven Brown, Shiva Tyagarajan, Charo Robles (LMU Munich) and colleagues looked at the molecular mechanisms in the brain that regulate sleep. They found that sleep need and synaptic function are closely linked.

Two mechanisms regulate sleep-wake rhythm. On the one hand, it is regulated by the day-night or circadian rhythm, which is well characterized and directed by a “master clock” in the suprachiasmatic nuclei of the hypothalamus. On the other hand, there is a pressure to sleep (a “homeostat”) that depends on activity during the wake period. The brain regions controlling it have yet to be fully characterized. The way the two mechanisms work together to regulate sleep is a big question in sleep research.

Rhythmic expression of RNA and proteins
ZNZ PhD student Sara Bernardez, in the group of Steven Brown and Shiva Tyagarajan, together with LMU PhD student Franziska Brüning in Robles’ group in Munich, wanted to find out what happens at the molecular level at neural synapses during sleep-wake cycles in mice. The focus was on how the production and activity of proteins in the synapses in the forebrain of mice increases and decreases cyclically over the course of a day. They isolated synapses from mice at different time points during a 24-hour period and analyzed messenger RNA (mRNA) and protein expression levels. The results showed that about 2/3 of total mRNA expression (which may or may not be translated to protein), 12% of all proteins, and around half of all phosphoproteins in the synapses have high-amplitude daily cycles peaking to anticipate sleep and wake. Fascinatingly, nearly all of the wake-anticipating RNAs and proteins were related to synaptic function, while nearly all of the sleep-anticipating RNAs and proteins were related to cellular regeneration and metabolism.

Search for the molecular clock
Next, they asked whether this cycling is governed by the circadian rhythm or by sleep and wake pressure. To answer this question, they deprived mice of sleep across the 24-hour day. mRNA cycling continued in synapses isolated from these sleep-deprived animals. In contrast, the daily rhythms of almost all cycling proteins and phosphoproteins were completely abolished when sleep need was kept high. Proteins, rather than RNA, carry out most cellular functions and phosphoproteins often have the characteristic that they modify other proteins to change their function. The fact that sleep deprivation cancels the rhythm of protein expression and function suggests that such function at synapses is governed more by the sleep homeostat than by the circadian clock.

“Our studies provide insight into the connectivity between sleep and circadian rhythms and suggest an elegant paradigm whereby a clock influenced by the circadian rhythm supplies synapses with mRNAs before dawn and dusk, which are later translated and functionally modified in response to sleep and wake pressure”, Steven Brown comments.