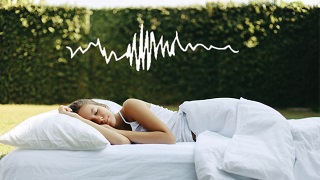 Can sleep be used to diagnose early onset schizophrenia in adolescents? A new study suggests that certain brain processes are altered during sleep in adolescent schizophrenia patients and that these changes are specific for schizophrenia. This knowledge may open the door to the development of a better diagnosis.

Adolescence is a vulnerable phase of brain maturation, also marked by increasing incidence of severe mental disorders such as early-onset schizophrenia and depressive disorders. Growing evidence points to the active role sleep plays in brain maturation and function. The sleep spindle is a thalamocortically generated oscillation between 12-15 Hz. It is thought to be associated with memory consolidation and delusional thinking and was found to be markedly reduced in adults with chronic schizophrenia.

This prompted us to ask the questions whether sleep spindles are also altered in adolescents with emerging mental disorders and how specific this alteration is for schizophrenia.

Reduced sleep spindle density in schizophrenia
To answer these questions, we aimed at identifying sleep spindle density (SSD) in adolescent patients affected by schizophrenia and compared them to SSD of healthy adolescents and adolescents with depressive disorders. All individuals were asked to sleep one night in the sleep laboratory wearing EEG nets with 128 electrodes. We used established automatic sleep spindle detection algorithms to analyse SSD. In an exploratory approach, we pooled data of both patient groups and correlated SSD with current symptom domains, neurocognitive performance and memory.

Adolescents with schizophrenia, showed a significantly reduced SSD over electrodes spanning a centro-temporal brain region compared to healthy controls. Compared to adolescents with depression, the SSD was reduced over a central cluster. With this result, we confirmed that the reduction of SSD was specific for schizophrenia. Lower SSD was associated with more severe cognitive deterioration, increasingly impaired memory consolidation and reduced processing speed.

What are the implications of these findings?
Reduced sleep spindles may represent a biomarker linking neuronal deficits to key symptom domains of schizophrenia such as cognitive dysfunction and disturbed perception. Since subtle cognitive disturbances can be detected long before manifestation of schizophrenia and cognitive impairment is the symptom domain that is most resistant to treatment, investigating and possibly therapeutically targeting SSD may be a path to better treatment of patients suffering from schizophrenia.