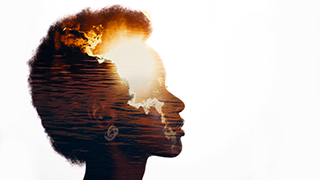 Anxiety disorders burden millions of people world-wide. Recently, a new source of anxiety in the brain was identified: the orexin/hypocretin neurons in the hypothalamus. Based on that finding, researchers at ETH Zurich’s D-HEST wanted to test a method that could help patients manage their symptoms.

In a previous study, Christin Kosse and Denis Burdakov observed that orexin/hypocretin neurons can be silenced by certain temporal patterns of electrical waves. Now, the researchers from the Burdakov Lab wondered if this approach can be used to reduce anxiety levels by stimulating the living brain. Using deep brain stimulation (DBS), they tested different patterns of electrical waves in the brains of mouse models of anxiety disorders. At the same time, they monitored orexin neuron activity using fiberoptic optogenetics.
It was very promising that the same electrical stimulation pattern that silenced orexin neurons in vitro could also silence them in the living mouse. Concurrent with this neural silencing, the treatment immediately relieved diverse anxiety symptoms in a variety of stressful situations. This therapeutic effect occurred without side effects typical of many existing treatments, such as sedation or memory deficits.

DBS is already established and approved for clinical use in humans for different neurological disorders. If this approach can now be translated from animal models to the human brain, patients could receive powerful support in managing treatment-resistant anxiety disorders.