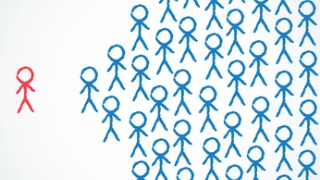 Psilocybin is a hallucinogen that induces an altered state of consciousness. This substance was used by Dr. Katrin Preller and colleagues to study the effects of social exclusion. In their paper, published in the May 3 issue of PNAS, the authors show that low doses of psilocybin can reduce the feeling of social pain.

It is generally agreed that social ties play a beneficial role in the maintenance of mental and physical well-being. However, psychiatric patients often encounter and are more sensitive to social exclusion. This influences the development of the disease and may have a negative effect on its treatment. Nevertheless, treatment of psychiatric disorders insufficiently targets social cognition and little is known about the underlying mechanisms.

Identification of key pathway for future treatment
Katrin Preller in the group of Prof. Franz Vollenweider at the University Hospital for Psychiatry Zurich, has used psilocybin, the active component of Mexican magic mushrooms, to study the neuro-modulatory mechanism of social exclusion. Psilocybin binds with high affinity to 5-HT1A/2A receptors of the serotonin system and recent evidence suggests that psilocybin at moderate doses reduces the processing of negative stimuli. Preller and colleagues have now shown that psilocybin also reduces processing of social rejection and alleviates feelings of social exclusion. Perhaps more importantly, they have shown that 5-HT1A/2A receptors and the amino acid neurotransmitter aspartate contribute to social cognition, and that these systems are key pathways that could be targeted by future treatments for psychiatric disorders.

Cyberball exclusion game
The researchers asked 21 healthy volunteers who received either low doses of psilocybin or a placebo to take part in a game called Cyberball, which involves throwing a virtual ball to a number of other players. Using functional magnetic resonance imaging (fMRI) and proton magnetic resonance spectroscopy, they examined brain activity and metabolite concentrations of test persons when they were excluded from the game by the other players. The volunteers were subsequently asked to fill out a post-task questionnaire.

The results show that social exclusion is associated with increased brain activity in frontal brain areas. After psilocybin treatment this brain activity was less pronounced compared to placebo. Furthermore, aspartate concentrations were associated with the reduced response to social rejection. After psilocybin treatment participants also reported that they felt less excluded in the post-task questionnaire.