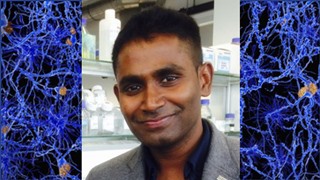 Rajendran of the Systems and Cell Biology of Neurodegeneration, Institute for Regenerative Medicine (IREM), University of Zurich, investigates the role of genes in predisposition for AD and the cell biology behind the disease. In his current ongoing research project he also focusses on the influence of dietary habits, especially intake of high amounts of proteins, on the progression of the disease.