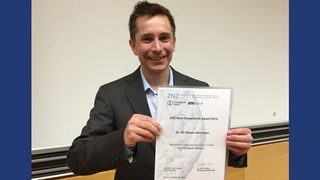 Dr. Uli Herrmann received this year’s ZNZ Best PhD Award for his work on a new substance that blocks propagation of prion proteins and increases survival in prion-infected mice. The prize that comes with a check of CHF 1000 was awarded at the ZNZ Symposium 2015. In his talk, Uli Herrmann presented data obtained during his PhD studies in the group of Prof. Adriano Aguzzi.

One of the possible therapeutic approaches to prion diseases is the prevention of the propagation of prions in the brain. To this end, Uli Herrmann used luminescent conjugated polythiopenes, or LCPs, to block propagation of infectious prion proteins. LCPs are compounds with high affinity for ordered protein aggregates. The rationale is that by binding to prion fibrils, the LCP molecules reduce breakage of the prion fibrils and thus reduce spread of new prion seeds that carry infectivity. In vitro, LCPs were shown to inactivate PrP propagation. In his talk, Uli Herrmann describes that intracerebral administration of LCPs into prion-infected mice, using osmotic pumps, increased survival. By applying rational chemical drug design, these compounds were further optimized, resulting in a new set of LCPs with robust prophylactic and therapeutic potency in prion-infected mice. The lead compound extended survival in these mice by >80%. Uli Hermann’s work demonstrates the feasibility of rational drug design for developing therapeutics to treat prion diseases.