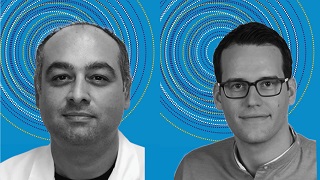 Ivan Jelčić and Faiez Al Nimer from the Department of Neuroimmunology and MS Research at the University Hospital Zurich were among the winners of the 2020 Pfizer Research Award. They have investigated the interactions between T- and B-cells in Multiple Sclerosis.

The Pfizer Research Award is granted to young scientists who have made outstanding and pioneering contributions to basic or clinical research at Swiss research institutes or hospitals. The prize money is CHF 15’000 per award. On February 6, 2020, the awards were handed to 19 researchers during a ceremony in Zurich.

The work by Ivan Jelčić and Faiez Al Nimer showed that the interaction of B- and T-lymphocytes is the key aspect for the increased T cell proliferation in MS patients. Their results offer a possible explanation why treatment with B-cell-depleting substances is effective in MS and could pave the way for further, more precise treatments of multiple sclerosis.

Multiple sclerosis (MS) is a chronic inflammatory autoimmune disease of the central nervous system (CNS) and one of the most common causes of neurological disorders in young adults. Despite intense research efforts, the cause for this disease remains unclear. The main focus is on the T-cell mediated autoimmune reaction, in which T-cells react against antigens in the CNS. However, it becomes increasingly clear that B-cells also play an important role in the activation of inflammatory processes.