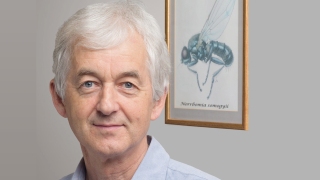 Prof. Dr. Peter Somogyi, Director of the Anatomical Neuropharmacology Unit, Department of Pharmacology, Oxford University, has been awarded an honorary doctorate from the University of Zurich, in recognition for his outstanding work to decipher the functional organization of inhibitory neuronal circuits in the cerebral cortex. He has received his degree during the dies academicus of the University of Zurich on April 26, 2014. On this occasion, he has also given a lecture, at the Institute of Pharmacology and Toxicology, entitled “Behaviour-dependent rhythmic subcellular re-distribution of inhibition on hippocampal pyramidal cells”.

McGill – Oxford – ZNZ Partnership
Prof. Somogyi is a member of Oxford Neuroscience, a leading institution in the UK in the field of neurosciences. In June 2013, Brain@McGill, Oxford Neuroscience and the ZNZ have signed a new memorandum of understanding establishing the McGill – Oxford – ZNZ Partnership in the Neurosciences. The partnership will open new horizons in basic research and clinical intervention and foster research synergies between groups with complementary infrastructure, knowledge and research expertise. Excellence in neuroscience education and postgraduate training will be fostered by facilitating student mobility across the three centres.
More