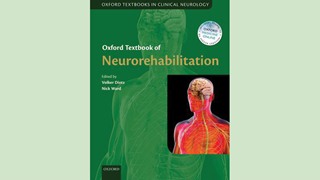 The book Neurorehabilitation, edited by Volker Dietz and Nick Ward, provides an understanding of the theoretical foundations of neurorehabilitation and presents clinical recommendations that are based on a mix of established evidence and clinical experience.

The book – that is aimed at a broad range of clinicians – moves the reader from theory to practice. It provides the reader with an understanding of the theoretical underpinnings of neurorehabilitation, as well as a clear idea about how (and why) to approach treatment decisions in individual patients. These clinical recommendations are based on a mix of established evidence and clinical experience that the authors bring to bear on their topics.