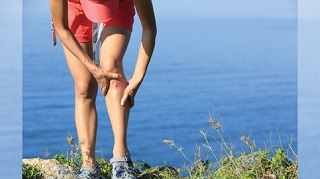 When we fall over and hurt ourselves, we intuitively inspect the affected body part and apply a remedy to it. Nociceptive topognosis (Greek: knowing the place), the ability to feel and name the painful location on the body surface is essential for adequate interpretation and successful treatment of pathologies, both in everyday life as well as in clinical settings. It is proposed to rely on maps of organized point-to-point connections between the body surface and the CNS. One fundamental principle of such maps is that sensory information from one side of the body is processed by neural circuits in the other (contralateral) body part by neurons crossing the nervous system midline. The axon guidance receptor “deleted in colorectal cancer” (DCC) has been implicated in promoting the growth of axons across the midline. Researchers from McGill and Zurich Universities now wanted to know if DCC-mediated midline crossing is a prerequisite for correct development of nociceptive topognosis. 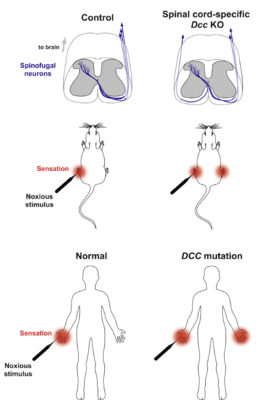 In a collaborative project, research teams from McGill and Zurich University found that in a mouse model in which DCC was specifically ablated in the spinal cord, a significant fraction of spino-thalamic tract neurons failed to cross over the spinal cord midline. In sensory behavior experiments they showed that, as a consequence of crossover failure, the DCC knock-out mice were unable to localize painful stimuli correctly and displayed pain behaviors that were not only directed to the site of painful stimulation (as in normal control mice) but also to other non-stimulated sites.

“We conclude that DCC-mediated axonal midline crossing of the ascending spinothalamic tract is needed in mice and men to accurately encode the location of peripheral sensory stimuli, says Dr. Helge Johannssen of the Institute of Pharmacology and Toxicology, University of Zurich, co-author of the paper. “Our findings conclusively describe the effects of spinal DCC mutations on sensory behaviors and the underlying functional anatomy. This will lead to further mechanistic insights into this phenomenon, paving the way for a better differential diagnosis or improved future treatment options for DCC-dependent pathologies.”