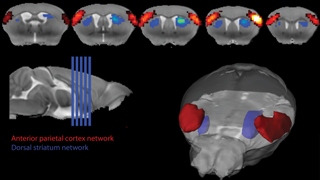 Resting state functional magnetic resonance imaging (fMRI) is a popular technique to study how different regions of the brain communicate while the brain is at rest. The resting state approach is useful to explore the brain’s functional organization and to examine if it is altered in neurological disease. Mice are often used in fMRI experiments to study the changes in functional connectivity in models of neurological disease. For these fMRI experiments, the animals are generally anesthetized in order to avoid movement of the animals during the examination and minimize potential distress.

Inevitably these sedative substances influence functional connectivity patterns in the brain and these effects have to be understood. Therefore, first authors Grandjean and Schroeter and colleagues compared the effect of five different anesthetics on fMRI signals. Each class of anesthetic tested had a different effect on functional connectivity between brain regions. The researchers propose a combination of low-dose medetomidine and isoflurane as a suitable anesthesia for resting state fMRI in mice. With this anesthetic regimen functional connectivity in the sedated mice comes closest to that observed in awake animals and humans.

What is fMRI?
Functional magnetic resonance imaging (fMRI) is a functional neuroimaging procedure using MRI technology that captures functional changes in the brain caused by neuronal activity. This technique is similar to MRI, but it additionally measures brain activity by detecting changes in blood flow. It relies on the fact that when an area of the brain is in use, blood flow to that region also increases; i.e. cerebral blood flow and neuronal activation are coupled.