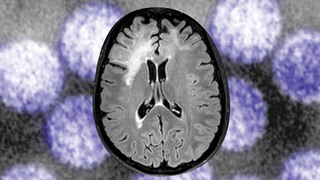 Prof. Roland Martin and colleagues, together with the company Neurimmune, have developed recombinant antibodies as potential treatment of a serious infectious disease of the brain caused by the human polyoma tumor virus JC. What is unique about these antibodies is that they are based on natural anti-JC virus antibodies isolated from an individual who had recovered from the infection.

The human JC polyomavirus is an insidious virus. According to recent estimates, over 60% of the world’s population carries the virus in peripheral organs but without symptoms. In individuals with a depressed immune system, however, the virus mutates and finds its way to the CNS. Once there, it causes progressive multifocal leukoencephalopathy (PML), a demyelinating disease for which there is currently no treatment.

Neutralizing antibodies as possible treatment
Over 560 MS patients across the world, who have been treated with one specific antibody that is used as therapy for multiple sclerosis, have developed PML. PML may also occur after tumor therapy, transplantation, HIV infection, treatment of autoimmune diseases and in patients with genetic immunodeficiency. The condition is fatal unless immune function is restored, which is often not possible. It is the information obtained from recovered patients, which the research group around Martin used to find a possible way to cure PML. In their paper that appeared in the September issue of Science Translational Medicine, they report the detection of neutralizing antibodies against a mutated JC viral protein in the cerebrospinal fluid of these patients. These antibodies were cloned from the patient’s B lymphocytes and recombinantly expressed. A first experiment delivered encouraging results: In cells treated with the neutralizing antibodies specific for the JC virus the viral infection can be neutralized.

Breakthrough achieved
A number of neutralizing antibodies have been selected that all bind to a mutation-associated exterior loop of the viral protein. These cloned antibodies are promising tools for the passive immunization of PML patients and represent a major breakthrough in the development of a treatment for PML.