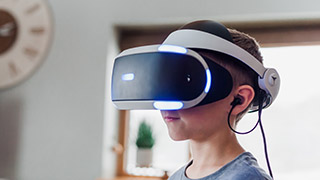 Attention Deficit Hyperactivity Disorder (ADHD) is often considered a childhood disorder but in half of the diagnosed children and adolescents, symptoms persist into adulthood. Effective medication is available, however, nonpharmacological treatments have become increasingly popular in recent years. Neurofeedback promises long-term improvement of ADHD and its high-tech features and playful therapy settings are appealing to young patients. Daniel Brandeis from the Department of Child and Adolescent Psychiatry and Psychotherapy in Zurich investigated as part of a European multicenter study whether it is also as effective as attractive.

ADHD does not exactly reflect a complete deficit of attention, but is more an issue regulating it. This makes it harder to prioritize, avoid impulses or to focus. Neurofeedback uses brain signals linked to ADHD and modulated in games to improve the underlying cognitive process of self-regulation. Advanced neurofeedback allows even to personalize the therapy protocol to individual brain wave characteristics and to train comfortably at home. However, controlled evidence for its efficacy is limited, and the comparison with optimized medication is crucial. Research groups from four different countries, amongst others from Zurich and Geneva joined  forces and tested in a multi-center study whether advanced personalized home neurofeedback was as effective as optimized medication for treating ADHD. Children between seven and thirteen years old were assigned either to neurofeedback or medication therapy. After ninety days, both treatments significantly improved ADHD and associated problems. However, home neurofeedback reduced symptoms only by 25% and medication almost by half. While medication effects remained stable, symptoms during neurofeedback therapy continued to slightly improve after an intermediate assessment.

Due to the inferior, slower response along with a poorer adherence, neurofeedback as a standalone ADHD treatment is not recommended, in particular if there is a need for rapid improvement. But this large European multicenter study also shows that if parents and children are trained properly how to handle the neurofeedback equipment, personalized home neurofeedback is feasible and yields some good results and tolerability. Further research needs however to explore long-term effects and the combination of treatments.

By: Daniel Brandeis, Department of Child and Adolescent Psychiatry and Psychotherapy, Psychiatric Hospital, University of Zurich.