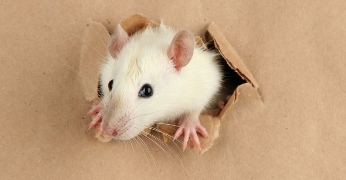 A ticking clock that we no longer hear, the touch of clothes  we no longer feel: We perceive the world as our brain continuously filters the incoming sensory information from our environment. How this adaptation works and where in the brain it happens, is the topic of a Nature Neuroscience paper by the groups of Fritjof Helmchen (Brain Research Institute, UZH) and Bruno Weber (Institute of Pharmacology and Toxicology, UZH).

The neocortex is crucial for the transformation of incoming sensory inputs, but little is known about how its activity relates to actual stimulus perception. Simon Musall and colleagues addressed this question in the rat barrel cortex, the whisker-related region in primary somatosensory cortex. Single whiskers of the rats in their experiments were stimulated mechanically and the rats were trained to recognize on which side they received higher frequency stimuli. Interestingly, the rats had great difficulty to discriminate between continuous stimulation and a single stimulus, which shows that adaptation happens very rapidly after a train of stimuli is started.

Overruling of adaptation increases responsiveness
The researchers started to manipulate adaptation in these trained rats by overruling it. They made neurons in the somatosensory cortex excitable by light by expressing channelrhodopsin-2, which allowed them to force cortical neurons to respond to a train of repeated light stimuli. Remarkably, when the neurons of both sides of the somatosensory cortex in these animals were stimulated with light, the rats were now able to discriminate between continuous stimuli and pulse stimuli. Thus in the absence of adaptation, the rats were more responsive to the stimuli and better able to discriminate between higher and lower frequency stimulation.
So if rats were more responsive to their environment in the absence of adaptation, what might be the beneficial effect of adaptation? This was tested in a change-detection task where single stronger stimuli were embedded in the stimulus trains. In this task, animals performed better with whisker than with optical stimulation, meaning that the rats were better able to discriminate changes.

The results demonstrate that adaptation at the level of the primary sensory cortex directly influences behavior. The authors conclude that neocortical adaptation provides a trade-off between being better able to respond to changes and the sensitivity to steady-state conditions. Absence of adaptation may lead to over-stimulation of senses and is thought to be associated with neurological disorders such as autism.