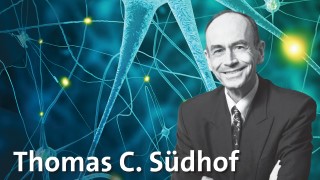 Prof. Thomas Südhof, Nobel Prize Winner in Physiology or Medicine 2013, held the first Konrad-Akert Lecture on 5 June 2019. The new lecture series is organized by the Brain Research Institute in honor of Konrad Akert, who founded the Institute in 1962 at the University of Zurich.

Sebastian Jessberger and Csaba Földy, directors of the Brain Research Institute, and Beatrice Beck Schimmer, Vice President Medicine UZH, gave a warm welcome to the prominent speaker. Südhof, investigator at the Howard Hughes Medical Institute and Stanford University, received the Nobel Prize together with James Rothman and Randy Schekman. He discovered the control mechanism of how neurotransmitters are released from synaptic vesicles involving calcium signaling between the nerve cells. The mechanism explains how temporal precision is achieved and how vesicles´ contents can be released on command.

In his talk, Thomas Südhof described his state-of the-art research on the presynaptic cell adhesion molecule neurexin, which mediates signaling across the synapse and influences the properties of neural circuits by synapse specificity. Generally in humans, alterations in genes encoding neurexins are implicated in autism and other cognitive diseases, such as
Tourette syndrome and schizophrenia. Many other cell adhesion molecules exist and for the majority, the specifics of their functions are unknown.