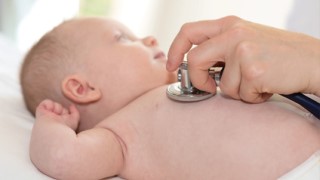 Heart defects are the most common birth defects. They cause neurodevelopmental problems in affected children, including problems with communication and speech. Andras Jakab and the Research Group Heart and Brain at the Children’s hospital showed that slower growth of the brain region in the left temporal plane in the time around heart surgery is a reliable predictor for delayed development of speech.

Congenital heart defects account for a third of all congenital anomaly cases. Surgical correction dramatically improves survival rates, but in many cases the neurodevelopment appears to continue to lag behind. Deficits in higher cognitive functions are particularly common, including
developmental delay in communication and speech ability. It remains unclear whether the delay in cognitive development is reflected in a change of brain growth patterns.

To answer this question, Andras Jakab and colleagues investigated whether the rate of regional brain growth in the time period around the operation is correlated with neurodevelopment in later life. Forty-four newborns with heart defects were included in the study. During the first month of life, the neonates underwent surgery, and their brains were scanned before and after the operation by cerebral MRI. The researchers calculated average daily growth based on these MRI images.

They found a strong correlation between the growth rate in brain areas associated with auditory (Heschl’s gyrus) and language processing (anterior planum temporale) and the language score at of the infants at 12 months of age, especially after the results were corrected for the length of hospital stay. Not surprisingly, the length of hospital stay also influenced general brain development, as a longer stay in hospital generally means more severe disease.

No significant correlation was found between brain growth rates and motor or more generalized cognitive scores, showing the specificity of the development in the described brain regions.

The results show that the brain growth rate in the temporal plane region in the time period around surgery results is a reliable neural correlate of language development at 1 year of age. They also highlight the importance of left temporal region in language development, even before direct exposure to language. Their results underscore the importance of early neuroimaging assessments in infants with severe CHD, which provides measures such as the regional brain growth rate which could serve as a marker for altered brain development.