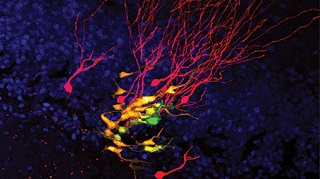 For the first time, researchers have been able to follow the fate of neuronal stem cells in the intact adult mouse brain. The new study by the group of Prof. Jessberger and colleagues, published in Science, provides insight in hippocampal neurogenesis by using chronic in vivo imaging.

The addition of new neurons to the dentate gyrus in the hippocampus of the adult brain is key to learning and memory functions. If neurogenesis in the hippocampus fails it can cause a variety of diseases such as major depression and age-related cognitive decline. Understanding the mechanisms underlying adult neurogenesis will help develop therapies targeting adult neural stem cells for endogenous brain repair.

Gregor-Alexander Pilz and Sara Bottes in the lab of Sebastian Jessberger have genetically labeled individual neural stem cells in the mouse hippocampus and used 2-photon imaging to observe stem cell divisions in situ during 2 months. The results revealed that stem cells in the hippocampus only divided a limited number of times and that self-renewal was temporally limited, meaning that once a stem cell had entered cell division it did not revert back to a long-term quiescent state.

“In the past it was deemed technically impossible to follow single stem cells in the brain over time given the deep localization of the hippocampus in the brain”, said Jessberger. He added that the breakthrough was only made possible by forming an interdisciplinary team. “We were fortunate that a group of collaborators, including Fritjof Helmchen from the Brain Research Institute and David Jörg and Benjamin Simons from the University of Cambridge, joined efforts to bring together their expertise in deep brain imaging and theoretical modelling, which allowed us to obtain and understand our data”.

Image: An individual neural stem cell (green) is shown beside the new neurons it has produced (yellow, orange and red, depending on their age) over the course of two months in an adult mouse hippocampus.