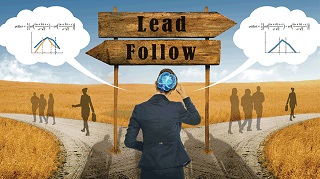 What makes a leader? A new study from the Department of Economics examined the behavior and neurobiology underlying leadership preferences and found that individuals who showed less “responsibility aversion” had higher leadership scores.

Despite the fact that leadership is central to human societies, the neurobiology of leadership and why some choose to lead and others prefer to follow, is not fully understood. One aspect of leadership is the acceptance of responsibility, as leaders are responsible for others in the choices they make.

Micah Edelson and his colleagues at the Zurich Center for Neuroeconomics wanted to find out what processes take place in the brain when an individual is faced with the decision to take a leading role or rather let others take the lead. They used a decision-making task to examine leadership choices and the brain regions involved.

Decide or delegate
In the study, leaders of groups could either make a decision themselves or delegate it to their group. A distinction was drawn between “self” trials, in which the decision only affected the decision-makers themselves, and “group” trials, in which there were consequences for the whole group. The neurobiological processes taking place in the brains of the participants as they were making the decisions were examined using functional magnetic resonance imaging (fMRI). The results were compared between “self” trials and “group” trials.

Almost all participants needed a higher level of certainty when deciding for others. This difference between deciding for self and others was termed responsibility aversion, or the unwillingness to make decisions that also affect others. The magnitude of this difference correlated with who has leadership qualities or positions in real life.

“Because this framework highlights the change in the amount of certainty required to make a decision, and not the individual’s general tendency for assuming control, it can account for many different leadership types”, says lead author Micah Edelson. “These can include authoritarian leaders who make most decisions themselves, and egalitarian leaders who frequently seek a group consensus.”

Interestingly, however, the study also showed that participants that took on a leading role are not necessarily the more successful leaders: Participants with particularly low aversion to leadership decisions did not win more money for the group than those who preferred to decide together with others.

Brain regions involved in leadership aversion
The study identified links between medial prefrontal cortex—previously shown to encode both subjective value and confidence—and anterior insula as important regions of the brain that mediate leadership decisions. In turn, this connectivity was modulated by temporal lobe regions commonly implicated in thinking about others. Future studies are now needed to ask how the elements of the signal detection model relate to activity of the nodes in this network.