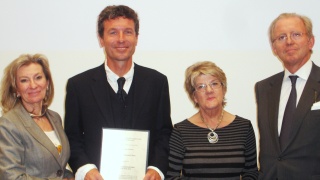 This year’s Koetser Brain Research Award goes to Prof. Massimo Scanziani of the University of San Diego. He receives the award in appreciation of his outstanding research in the field of neuronal networks, particularly for elucidating mechanisms that regulate the balance between excitation and inhibition in the neocortex of the mammalian brain.

Following the award presentation by the Koetser family on 11 September 2014 within the framework of the ZNZ annual symposium, Prof. Scanziani presented his most recent research findings in the Koetser Memorial Lecture.

The neocortex of the brain is associated with higher brain functions such as memory, reasoning and speech.  The coordinated activity of neuronal populations in time and space is fundamental for accurate sensory processing, motor coordination and higher cognitive functions.  The work of Prof. Scanziani’s laboratory focuses on the control of cortical activity, specifically on mechanisms regulating the balance between excitation and inhibition. It was already known that when excitation increases, inhibition increases proportionally.  However, it remained unclear whether this inhibition was homogeneously distributed or individually matched to the excitation level of each excitatory neuron. In the most recent work of Prof. Scanziani’s group this issue could be clarified. They discovered that excitatory neurons in the mouse cortex receive inhibition in a similar proportion to their excitation and that this matching inhibition is mediated by a specific subtype of inhibitory interneurons.  These unexpected findings about the mechanisms underlying the balance between excitation and inhibition are highly valuable, since small disruptions of this balance can lead to numerous pathological states, ranging from epilepsy to schizophrenia.

About the person
Massimo Scanziani graduated in Zurich in 1993. After his postdoc periods in the US and in Paris he came back to the University of Zurich to be an assistant professor at the Brain Research Institute in 1997. In 2002 he was recruited by the University of California, San Diego, where he now works as a full professor. In 2008, the prestigious Howard Hughes Medical Institute (HHMI) in the US, a non-profit organization dedicated to bio-medical research, named Massimo Scanziani an HHMI investigator for his research on information processing in the mammalian brain.