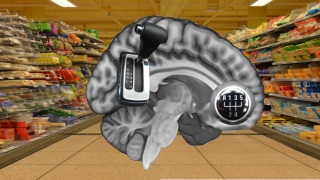 Our brain is geared to make choices, but how does this work and which brain regions are involved? Research by Marcus Grueschow, Christian Ruff and colleagues has for the first time broken apart the value system and has identified a brain region that is tightly associated with how we are distracted by valuable stimuli in our environment during decision making. This region could be a target for future treatment of maladaptive behavior.

If we have the choice of several options and are free to choose, we base our choices on a subjective value. The subjective value describes the most attractive option for us at that moment, for example when we decide which food to eat or whether to buy a product at a certain price. Unfortunately, not always the wisest or healthiest choices are being made from an objective point of view and in some cases this behavior can become pathological. It is therefore important to understand how value-based choices are made and which brain regions are involved.

Unraveling the brain clusters involved in decision-making
Research results of the last two decades pointed to the involvement of a conglomerate of brain regions in preference-based choice encoding, including the medial prefrontal cortex (mPFC), the posterior cingulate cortex (PCC), and the ventral striatum (VS). But what is the contribution of value representations in the individual clusters to behavior? To answer this question, Grueschow and colleagues devised a novel test set-up. They gave test persons CHF 20 and offered them DVDs to buy. While in a MRI scanner, the test persons had to decide whether they wanted to buy the DVD and how much money they wanted to spend on it – the value-based task. With this task the subjective value, or preference, a person attached to the DVD was measured. Alternating with this task, subjects had to do a value-irrelevant task in which they heard a number over their headphones and were asked to match this number to the number of faces on the DVD. Marcus Grueschow explains: “Using this test set-up, we succeeded in engaging a subject in a perceptual task that is unrelated to the preference for the video. Subjects had to match the number of faces on the cover, but the DVD itself also represents a preference. The preference is irrelevant for the perceptual task, but it is represented in behavior. This is called automatic value attraction.”

The posterior cingulate cortex is involved in automatic value attraction
Grueschow and colleagues were able to show that specifically regions in the PCC and not the mPFC were involved in the automatic value attraction or “distraction” part of the decision. Moreover, their results show that the higher the subjective value of the DVD for the test person, (the more the test person’s attention is grabbed by it), the longer the reaction times in the actual task of matching numbers of faces on the DVDs.
“Automatic value attraction is relevant for maladaptive behavior such as obesity or addiction, when people actually make bad choices”, Grueschow says, “We have pinpointed a brain region that is tightly associated with this automatic value capture in healthy persons. We now have to look in persons suffering from the consequences of e.g. an addiction, to see how these regions contribute to this behavior.”