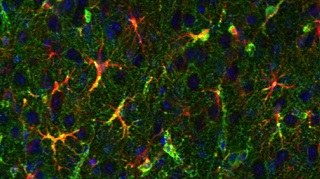 Astrocyte calcium signals are fast enough to play a role in neuronal information processing and changes in local blood flow, research from Jill Stobart and Prof. Bruno Weber suggests. In their Neuron paper, they show that astrocyte signaling occurs within 100 ms of neuron signaling and finally settle the debate about the importance of these glial cells in fast brain processes.

Astrocytes are in contact with thousands of synapses and are also wrapped around blood vessels. This suggests they may modulate synaptic activity and mediate changes in local blood flow through calcium-dependent mechanisms. However, several studies have reported that astrocytes are too slow to do this. The calcium signals measured in these studies appeared seconds after neuronal activity and after local vasodilation. Therefore, the consensus in the field was that astrocytes are merely listening to neighboring neurons and are not playing an active modulatory role.

Use of different calcium indicators for neurons and astrocytes
Jill Stobart and Bruno Weber at the Institute of Pharmacology and Toxicology – Experimental Imaging and Neuroenergetics, and colleagues have addressed this problem by examining the temporal dynamics of astrocyte calcium micro domains in fine astrocytic processes during sensory stimulation and compared them with nearby neurons. They used 2-photon imaging to visualize a red calcium indicator used to label neurons and green calcium indicators for astrocytes. During imaging, Stobart and colleagues vibrated single whiskers to evoke neuronal activity in the corresponding cortical area of a mouse and analyzed the images using the Toolbox for Matlab CHIPS that allows the automated selection of active microdomains.