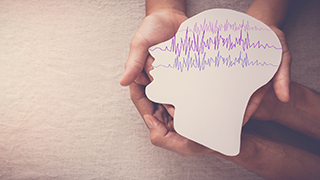 High-frequency brain waves (HFO) have been initially established as epilepsy biomarkers using electrodes that are implanted directly into the brain. Recently, these brain waves have also been recorded in the non-invasive scalp EEG, indicating their potential use as epilepsy biomarkers in a broader population. Georgia Ramantani and her research group at the Department of Neuropediatrics at the University Children’s Hospital Zurich took a closer look how characteristics of this biomarker change during brain development in children.

Beyond their use for delineating the epileptogenic tissue to be surgically resected, researchers currently investigate HFO as biomarkers of epileptogenesis, disease severity, and treatment response in particular in children. However, it is unclear how HFO characteristics change with age throughout childhood. If HFO are to be used as an EEG biomarker in children, possible developmental changes must be identified and described first.
Since the frequency band of muscle artefacts and HFO overlap in the EEG, the most precise way to characterize HFO is when we are at rest. Therefore, scalp EEG was recorded in thirty children and adolescents with epilepsy during sleep. After analyzing sleep stages, the researchers used an automated and clinically validated HFO detector, previously developed by their group.
The data analysis provided evidence that scalp HFO rates decrease with age in pediatric epilepsy. Ramantani and her colleagues were able to characterize these developmental changes along crucial parameters such as frequency, duration, amplitude and signal-to-noise ratio (SNR). They showed that whilst scalp HFO frequency decreases and SNR improves with age, there is no age-related effect in HFO duration and amplitude. Moreover, they demonstrated that reliable measures of HFO can be achieved in rather short data segments of 10 minutes, which is very promising in terms of applicability. Non-invasive biomarkers for monitoring epileptogenesis, disease severity, and treatment response, such as those deriving from scalp EEG, are at the forefront of current research. This study is a further step towards establishing scalp HFO as a valid epilepsy biomarker in the pediatric population. Scalp HFO can drastically improve epilepsy management in the first years of life and, thus, help to accomplish superior seizure and cognitive outcomes in this vulnerable population.