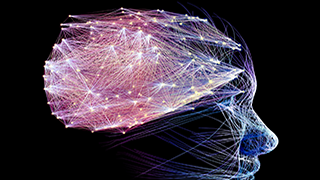 The brain is composed of more than 80 billion neurons, which are highly interconnected and communicate through electrical signals. Understanding how neurons use these electrical signals to exchange information is essential to elucidate the functioning of the brain and could help to find cures for neurodegenerative diseases. In the Laboratory of Biosensors and Bioelectronics at the ETH Zurich, Sophie Girardin and her colleagues try to deconstruct the brain by building very simple in vitro networks of less than 100 neurons. The hope is that understanding how such a small number of neurons interact can give insights into the much more complex system, that is the brain.

The type of neurons Girardin and colleagues use to build small networks are so-called “induced pluripotent stem cell-derived neurons”. iPSC derived neurons are human skin cells that were reprogrammed into neurons by exposing them to a specific mix of molecules. To connect these neurons in a very controlled way, a transparent polymer (PDMS) was used that can be patterned with micrometer-sized features to build small “labyrinths” in which neurons can grow.

Girardin and colleagues could prove that building circular networks of human-derived neurons in vitro is possible. The networks were composed of four “nodes” containing 1-25 neurons and connected by bundles of axons that grew in the PDMS microchannels. Neurons started to connect and exchanged electrical signals, which was recorded through electrodes placed under the microchannels. Moreover, by electrically stimulating the circuits using the same electrodes, the researchers elicited a very consistent electrical response from the circuits. These small networks of neurons can now be used to answer fundamental neuroscience questions, such as how plasticity takes place in a small assembly of neurons. They could also potentially be used for testing drugs for neurodegenerative diseases, a field of research that is currently struggling. A next step could be to build networks with neurons from diseased patients and test the effect of potential drugs on the electrical activity of these neurons.

By: Sophie Girardin, Laboratory of Biosensors and Bioelectronics, ETH Zürich