Benjamin Grewe was recently appointed tenure track assistant professor of Systems and Circuits Neuroinformatics. We asked him what we can learn from neural networks and how he plans to get a better understanding of computation in the brain.

ZNZ News: What is your research topic?
Prof. Grewe: The goal is to understand how information processing in the brain works and how we 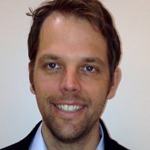 can apply this knowledge to develop better and faster computational algorithms so that computers and machines can act in the ‘real’ world and solve tasks similar to humans. Although major advances have been made in computer science with neural-inspired computing algorithms, computers still have problems with complex tasks for example to understand the high level concept of a spoken sentence. Currently, computer scientists try to solve this problem by using artificial neural networks consisting of several network layers – a technique called ‘deep learning’ that has been inspired by the brain. The use of neural-inspired computing has enormous potential, for example in autonomous cars. Tesla’s autopilot is based on a neural network image-processing algorithm. However, thinking of the complex problems humans are capable of solving, there is still a lot to be learned from neural networks in our brain.

How do you approach this?
As systems/computational neuroscientists, we study neural computation in mice that have learned to solve very specific tasks, by measuring brain activity. If a neuron is electrically active there is a calcium influx into the cell. We can measure this calcium influx and thus record the neuronal activity indirectly by using a fluorescent calcium indicator that increases its signal upon binding to calcium. The calcium indicators we use are genetically engineered proteins that we express in brain cells using a viral vector. To measure the optical signal of the fluorescent indicator, we implant a little micro-optic lens in the brain. We then record neural activity with a small microscope that has been developed in my previous lab in Stanford. This microscope only weighs around 2 grams and can be clicked on the mouse’s head. We then train the mice to distinguish stimuli, such as an auditory or visual stimulus while recording the neuronal activity of up to 1000 neurons simultaneously over longer periods of time, sometimes up to 9 months. This way we can directly measure how neuronal networks encode a specific behavior of the mouse.

What is an important contribution of your research?
During my postdoc at Stanford, my colleagues and I have developed tiny cylindrical micro-lenses that can be implanted in the brain of the mice to optically access deeper brain areas. Before, it was only possible to study the surface of the brain. In my last project we looked at the amygdala, the brain area where emotions are processed, using this newly developed micro-lens. These lenses are now available to other researchers and I think it is safe to say that the technique has revolutionized neuroscience. Many research groups now use this technique to study previously inaccessible brain areas, such as the amygdala or the hypothalamus.
In combination with genetic constructs for expression of calcium indicators in subtypes of neurons we can now even collect targeted data from specific brain cells.

What made you decide to come back to Zurich?
During my PhD at the Brain Research Institute, I learned to appreciate Zurich. It is the whole package that attracts me: Zurich offers high quality research and the city’s setting is very appealing. It even outweighs California with its lovely weather.

Can you tell us about your plans for future research?
Networks are complex and changing over time. In my last paper we looked at how the brain creates associated memory in large networks in the amygdala. In order to better understand how these large networks encode a certain behavior in mice, we need better analysis methods and a better understanding of the underlying variables that drive these neural circuits.
In my group, that now consists of three people, I want to start using a more top down ap