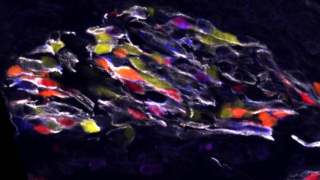 How multipotent are neural crest cells and is their fate determined before they migrate? This long-standing controversy has now been ended by the work of Prof. Lukas Sommer of the Institute of Anatomy, UZH, and his international colleagues. Their work, published in the March 5 issue of Cell Stem Cell, provides definite evidence for the in-vivo multipotency of both premigratory and migrating neural crest cells in the mouse.

Although it is known that neural crest cells are multipotent, there is debate in the field about exactly how multipotent these cells are and at what time point the lineage fate of the cells is determined. Many experiments have shown that the majority of neural crest cells have the potency to develop in every possible neural crest-derived cell type. Other studies, however, found that the cells were already lineage- programmed before leaving the neural crest.
Tracing single neural crest cells was not possible in-vivo and therefore often in-vitro clonal cultures have been used to study the fate of single cells. These results may not translate directly to the in-vivo situation in which the tissue environment influences cell behavior.

New in-vivo measurements
Lukas Sommer and colleagues have circumvented this problem by using the R26R-Confetti transgenic mouse model that enabled them to label single cells in unique colors and then follow derivatives of these cells to their destination tissues. Using these mice they were able to show that the majority of neural crest cells are multipotent, even during migration. “Our data are consistent with the existence of neural crest stem cells (NCSC) in-vivo. Because of their broad potency and accessibility, NCSC-like stem cells from adult tissues could be sources for future cell and tissue replacement therapies”, says Prof. Sommer, “A better understanding of these cells will also help gain insights into pathological processes involving these cells, such as melanoma.”

The neural crest
The neural crest is a transient embryonic structure in vertebrates that gives rise to most of the peripheral nervous system and to several non-neural cell types, including smooth muscle cells of the cardiovascular system, pigment cells in the skin, and craniofacial bones, cartilage, and connective tissue.