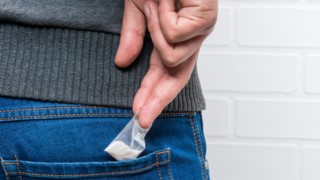 Cocaine is often cut with the animal anti-worming agent levamisole, which is known to induce adverse side effects on blood cells. Prof. Boris Quednow, Matthias Vonmoos and colleagues have now shown that the combination of cocaine and levamisole is associated with cognitive and cortical alterations. The authors call for programs aimed at reducing levamisole contamination of street cocaine.

Cocaine is cut with several adulterants, the most popular contaminant is currently the animal anti-worming agent levamisole used in animals. World-wide, around 70% of cocaine samples tested, contained levamisole. The reason why levamisole has become so popular is unclear. It is assumed that it either behaves very similar to cocaine or enhances the effects of cocaine. On the streets the substance cannot be simply detected and thus the adulteration is not recognized by the users.

Levamisole has been used as an anti-helminthic for humans as well, but has been retracted from the market for human use in 2003. As levamisole suppresses the production of white blood cells, severe side-effects have been reported. Previous reports suggested potential neurotoxicity of the compound but the specific effects of levamisole on the brain have not been systematically investigated in cocaine users so far.

Levamisole consumption impairs executive function
A team of researchers from the Psychiatric Hospital and the Institute of Forensic Medicine of the University of Zurich have now researched the effect of levamisole consumption on cognitive performance and brain structure. Using hair analysis of cocaine users, the researchers could establish cocaine use and the ratio of levamisole to cocaine the study participants had consumed over the last 3 months. Participants with similar cocaine consumption were divided into low and high levamisole groups.
As expected, the cocaine users showed lower performance than non-users in all areas – attention, working memory, long-term memory, and executive functions. However, performance of executive functions, such as flexible thinking and memory organization, were much worse in those who had consumed cocaine with high levels of levamisole.

In a second study, the researchers used magnetic resonance imaging (MRI) to find out whether there was also a difference in the brain anatomy. The same effect was seen in this study: People who consumed cocaine with a high levamisole content clearly displayed a thinner prefrontal cortex – the area of the brain associated with executive functions.

“Our results suggest that it is not just cocaine that changes the brain, but that levamisole has an additional harmful effect. We therefore think that prevention and drug policy-making should expand their drug-checking programs, so users can have their drugs tested and can avoid taking cocaine with high levels of levamisole”, Boris Quednow says.