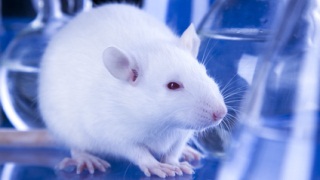 How is sensory information processing changing during learning? In their experiments published in Nature Neuroscience, Jerry Chen, Fritjof Helmchen and colleagues have made a significant step towards understanding the modulation of the neural signal pathways involved in learning, by showing that two pathways from primary sensory cortex to other cortical areas adapt differently during task training.

Neurons in the barrel cortex, the primary sensory area (S1) for whisker-related tactile processing, are a popular model system for sensory processing and plasticity in mice as their anatomical organization is fairly well-known. Sensory information that comes in via the mouse’s whiskers is processed in S1 and further transferred to other cortical brain regions. The neurons in S1 can be divided in at least 2 large non-overlapping subpopulations. One group projects to the secondary somatosensory cortex (S2) and the other to the primary motor cortex (M1). Jerry Chen at the Brain Research Institute (UZH) asked what sensory-related or behavior-related aspects these two pathways encode and how their activity changes during the training of a behavioral task.

Whiskers and sandpaper
To answer this question, mice were given the task to discriminate between different textured surfaces based on whisker touches. In the experimental set-up used the presented surfaces were rough and smooth sandpaper. Rewards were given when the mice licked correctly recognized a target texture (the rough sandpaper). During task performance the researchers continuously monitored the activity of neurons in the mouse whisker sensory cortex by chronic imaging. Using anatomical tracers, S1 neurons projecting to S2 or M1 could be distinguished.

S2-projecting neurons reflect decision-making
Their results show that activity in the two pathways adapts differentially during the learning phase. Whereas an increasing number of M1-projecting neurons became responsive to touch over the course of training – enhancing the representation of the sensory stimulus – the activity of these neurons did not reflect well the animal’s discrimination decision. Interestingly and in contrast, the pool of active S2-projecting neurons did not change in total number but showed larger reorganization so that these neurons acquired decision-related activity. The researchers conclude that their findings demonstrate pathway-specific adaptations of neuronal signal flow during task learning which may arise from interactions between S1 and S2.
According to Fritjof Helmchen, the finding of a differential modulation of two specific neuronal pathways in the neocortex during learning significantly adds to our knowledge of what happens in the brain when it learns.