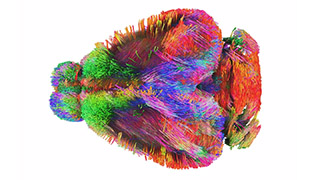 Autism spectrum disorders (ASD) are a set of neurodevelopmental conditions whose main symptoms include reduced social interactions and elevated repetitive behaviors. Despite large research efforts, the high geno- and phenotypical heterogeneity amongst ASD patients poses a serious challenge for understanding the underlying neuropathobiology. To date, research studying the neural basis of ASD-related symptoms has produced mixed results. A key question for Valerio Zerbi and Nicole Wenderoth from the ETH Zurich and Alessandro Gozzi from ITT Rovereto remained: Is autism associated with a specific brain network dysfunction? In other words, can we ‘see’ autism in the brain?

As many in the field assume that there MUST be an autism-specific brain print, the blame has often been placed on the brain mapping methods employed, describing them as noisy and unsuitable for the goal of identifying it. However, an equally plausible alternative explanation is that there is no autism-specific signature of brain dysfunction. This alternative hypothesis would actually be consistent with the etiological and behavioral heterogeneity of the autism spectrum.

To rigorously test this hypothesis we turned to mouse imaging to model the “spectrum” of autism by collecting sixteen different mutations in the mouse. We mapped and compared the functional connectivity signature obtained in each mutation using resting state functional MRI.

What we found is that each model exhibits significant aberrations in network connectivity when compared to their wildtype littermates – so fMRI isn’t that noisy after all. Furthermore, we found that autism-related genetic mutations define a landscape of pseudo-continuous “connectivity deficit” – this argues against a unique signature of network dysfunction for autism.

Using machine learning to group connectivity alterations across etiologies, we were able to differentiate these connectivity signatures. What we found was quite enlightening: first, there is no single signature, but the sixteen mouse models fall into four groups based on brain connectivity patterns. For example, one group shows increased connectivity between areas in the prefrontal cortex and amygdala, social and emotional regions of the brain, respectively; another group has increased connectivity between the hippocampus and ventral orbital cortex, regions involved in memory and higher cognitive functions. Furthermore, it was interesting to note that some of these subtypes show opposite patterns of under-versus-over-connectivity. This means that if mixed together in a single population these models would “cancel each other out” and drastically reduce the effect size of the analysis.

So what have we learned from this study? Autism is a spectrum also in terms of brain network dysfunction, and genetic variability is a key determinant of heterogeneous imaging findings in clinical populations. Divergent connectivity patterns can actually explain and reconcile conflicting and heterogeneous results in clinical trials. And identifying autism subtypes is a key prerequisite for making sense of autism heterogeneity and studying new targeted therapies.