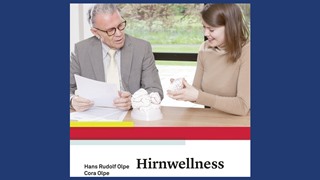 Alzheimer’s Disease, stroke and depression are among the most serious brain diseases. Lifestyle choices play an important role in their etiology. The new book by Hans-Ruedi Olpe and his daughter Cora Olpe addresses risk factors and highlights prevention options for these diseases.

According to Hans-Ruedi Olpe, prevention is one of the last, if not the last resort to absorb the cost explosion in the health care sector. Prevention options are the main topic of the new book “Hirnwellness” (brain wellness) by Hans-Rudolf and Cora Olpe in which they critically examine questions regarding nutrition, try to explain why physical exercise is so important and generally highlight the importance of lifestyle choices. The book also covers the current state of knowledge of Alzheimer’s Disease. Recent research has shown that even for Alzheimer’s Disease there is increasing evidence that an unhealthy lifestyle could be the cause of disease in one third of the cases.

Hans Rudolf Olpe is a neurobiologist and Professor emeritus of the Faculty of Medicine, University of Basel and Cora Olpe is biochemist at the University of Cambridge, UK.