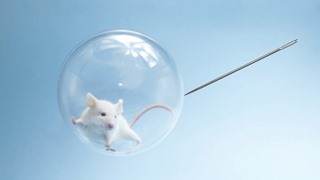 The blood brain barrier (BBB) is critical for brain health. Dr. Johannes Bohacek and Martin Roszkowski of the Brain Research Institute wanted to know whether stress could cause BBB leakiness. Their findings show that even under chronic stress conditions, BBB permeability is not changed by stress.

The blood-brain barrier (BBB) shields the brain from potentially harmful substances and forms a vital separation layer between the cerebral compartment and the circulating blood. Maintaining BBB function is therefore critical for brain health, and a leaky BBB is often involved in pathologic conditions of the brain such as multiple sclerosis, stroke, brain tumors, infections, and neurodegenerative disorders.
Several studies have reported that exposure to acute psychophysiological stressors can lead to an increase in blood-brain barrier permeability (BBBP). In 1996 a controversial publication by Friedman et al. implicated stress induced increase in BBBP in the so called “Gulf war syndrome”. Their hypothesis was that the syndrome was caused by the drug pyridostigmine – often administered to soldiers as protection against chemical warfare – that penetrated the brain under stressful situations.
In the years since, several studies have failed to reproduce the original work by Friedman and colleagues, casting doubt on the relationship between stress and BBBP.

The authors discuss that one reason for the discordance in the literature on BBBP and stress can be insufficient perfusion (necessary to remove residual tracer dye from the blood vessels) in stressed animals, which can lead to false positive findings.