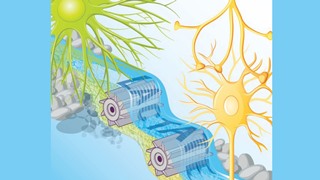 The brain has high energy requirements and lactate has been shown to be an important energy source for the brain. Prof. Bruno Weber and colleagues present in-vivo evidence in favor of the concept that astrocytes supply neurons with lactate to cover their high energy demand.

In comparison to other organs, the brain has one of the highest energy requirements. Neurons can efficiently use lactate as an energy substrate and have the capacity to fully oxidize it. The role of astrocytes in supplying neurons with lactate was already postulated in the 1990s and has since been the subject of many research studies. Due to a lack of experimental techniques it remained unclear whether this exchange of lactate between astrocytes and neurons really exists in-vivo.

Evidence for astrocyte-neuron lactate shuttle
Now, the group around Professor Bruno Weber has provided strong in-vivo evidence for this exchange, by demonstrating that there is a lactate gradient between astrocytes and neurons. In an extensive series of experiments the researchers show that astrocytes have much higher resting state levels of lactate than neurons. The key experiment demonstrates that astrocytes loose much more intracellular lactate in the presence of high levels of pyruvate than neurons. Lactate transport over the cell membrane is concentration-dependent and is mediated by monocarboxylate transporters (MCT). A typical property of the MCTs is that high extracellular pyruvate (or other substrates for MCT) concentrations drive lactate out of the cell. In these experiments a dramatic drop in lactate in astrocytes was observed, but not in neurons. This again points to a higher lactate concentration in astrocytes compared to neurons.
Together, the results show a clear lactate gradient between the two cell types. “Due to the fact that lactate transport by MCTs is a passive transport, such a concentration difference is a necessary condition for a lactate flux to be present”, says Bruno Weber in the UZH News Release. The data therefore support the astrocyte-neuron lactate shuttle model that forms the basis of brain energy metabolism.

Laconic made it possible
The availability of a genetically encoded fluorescent lactate sensor, called Laconic, enabling measurements of in-vivo intracellular lactate levels at the single cell level, made these experiments possible. Laconic was specifically expressed in astrocytes and in neurons using cell-type specific promotors and fluorescence was detected in the cortex of mice by two-photon laser scanning microscopy.