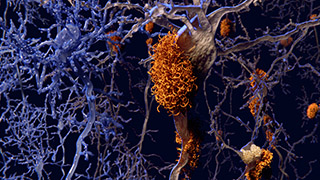 Alzheimer’s disease (AD) is linked to the neural build-up of clumps of a protein called β-amyloid peptide and characterized by severe memory loss, confusion or disorientation. One specific gene, known as APOE, has been identified that affects this process crucially and exists in three variants: E2, E3 and E4. People possessing two copies of APOE4 face a twelve-fold increased risk of getting the disease. On the other side, APOE2 is a protective factor against Alzheimer’s. However, the mechanism by which APOE4 increase and APOE2 decrease the probability of developing AD is unknown. The group of Christian Tackenberg from the Institute for Regenerative Medicine at the University of Zurich took a closer look how the different variants of APOE affect brain cells.

The researchers are employing human induced pluripotent stem cells (iPSC) in their experiments. The stem cells are called pluripotent because they can produce potentially any cell type. The iPSC used for this experiment were differentiated into fully functional astrocytes that are essential for brain function and produce most of the brain ApoE. Astrocyte dysfunction may also relate to AD pathogenesis.  Tackenberg and his colleagues analyzed the effect of the different APOE variants on the physiological functions of human astrocytes. They showed that the APOE genotype strongly affected the astrocytes. Pathways regulating cholesterol and lipid metabolism were decreased in APOE4 cells while inflammatory pathways were highest in APOE4 and lowest in APOE2 cells. Furthermore, APOE4 astrocytes took up less β-amyloid, one of the major protein aggregates in the AD brain, while APOE2 astrocytes took up the most.
This shows that ApoE plays a major role in several physiological and metabolic processes in human astrocytes. These findings not only uncover the detrimental effects of the major AD risk factor, APOE4, but also help explaining the protective effect of the APOE2 allele. Furthermore, the data clearly confirm ApoE4 as potent therapeutic target for the treatment of AD.

By: Christian Tackenberg, Institute for Regenerative Medicine, University of Zurich

Other useful links:
Group Website at the Institute for Regenerative Medicine