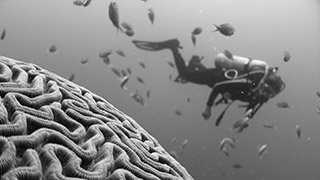 Oligodendrocytes wrap the axons of neurons with a fat-containg myelin sheath allowing the fast propagation of electric impulses. In certain diseases, for example in Multiple Sclerosis patients, oligodendrocytes are lost leading to neurodegeneration. Oligodendrocytes can be efficiently regenerated by oligodendrocyte precursor cells (OPCs) in a process called remyelination. However, it is not known how single OPCs proliferate and move, or how they interact with each other. Sara Bottes  and Sebastian Jessberger from the Brain Research Institute have set out to take a deep dive in the brain and explore OPCs and their daughter cells in more detail.

Multiphoton imaging represents a direct way to longitudinally study a dynamic process such as remyelination at the single cell level. Bottes and Jessberger literally made a window in the brain and used in vivo imaging to follow OPCs and their progeny for up to two months in the experimentally demyelinated corpus callosum of adult mice.

This study provides insights into the cell division capacity and how OPCs migrate to other positions in the brain. The majority of OPCs divided several times. However, only one out of six newborn cells differentiated into mature, remyelinating oligodendrocytes. OPCs born at early divisions showed a higher probability to survive. On the contrary, Bottes and Jessberger observed a lot of cell death among cells generated at later divisions.

For many years it was deemed impossible to follow individual cells over time in deep brain areas. This study represents a first step towards the understanding how single cells respond to demyelination. In fact, a key challenge in the field is the identification of the steps that fail during regeneration. Future studies using different mouse models will allow comparing the results obtained now, describing a rather efficient remyelination process, with defective remyelination models of chronic disease.